Shows give joy to rural communities 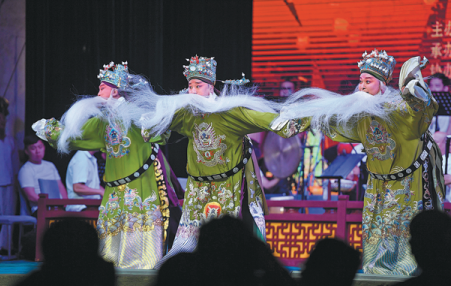 Artists from Taiyuan perform the local Jin Opera for residents in Houcun township in Qiuyang county. [Photo by Chai Jieliang for China Daily]

Dramas are no longer exclusive to big-city audiences in Shanxi, as troupes like the Shanxi Drama Theater arrange frequent tours of the countryside to entertain rural residents.

On Aug 19, residents in Xiaohe village in Yangquan city were excited by the news that there would be a free performance by the troupe at the square in their village.

Despite the evening drizzle, they waited an hour before the classic show called Beginning of Autumn.

In less than a month, Taiyuan-based Shanxi Drama Theater performed a score of shows in rural areas throughout the province.

"The trips were tiring but our artists thought it was worthwhile when they were greeted by smiles, applause and cheers from the villagers," said Zhang Kai, head of the troupe.

The troupe's performances are part of a provincial campaign, which started in 2017. It requires Shanxi's troupes of drama, opera, singing and dancing, as well as movie theaters, to "send 10,000 shows to the countryside". The aim is to enrich the cultural life and spiritual well-being of rural residents.

The Root of China Singing and Dancing Troupe from Taiyuan, for instance, has staged a total of 164 shows throughout rural areas of Shanxi.

"We have enjoyed great popularity among rural residents and their enthusiasm always impressed us a lot," said Wang Jingrong, head of the troupe and a renowned musician in Shanxi.

A show in Xiaojingyu village in the suburbs of Taiyuan in September attracted about 10,000 people, with many of them coming from neighboring villages and townships, according to Wang.

"A total of 1 million rural residents have watched our shows over the past three years," Wang said.

Open-air movie shows in public squares are among the most attractive activities for rural residents. This is because "these can evoke nostalgia among people", according to an audience member.

"Open-air movie shows were a popular form of entertainment for country folks when I was a child four decades ago," said Zhang Guihua, a resident in Ruicheng village in Jiancaoping district of Taiyuan. "But, later, the shows became fewer and disappeared gradually. We had to travel a dozen miles to see a movie in the city.

"We are happy to have the traditional entertainment back again."

Zhang Kai of Shanxi Drama Theater said the campaign is significant. It can enrich local cultural life while helping performance entities tap the market potential of the countryside.

"With the popularity of our shows in the countryside, we realized there is big market potential in rural Shanxi. The rural residents' demand for modern arts, like drama, is beyond our expectation," Zhang Kai said.

Li Shu contributed to this story.